What is the Highest Snap Score and Longest Snapchat Streak 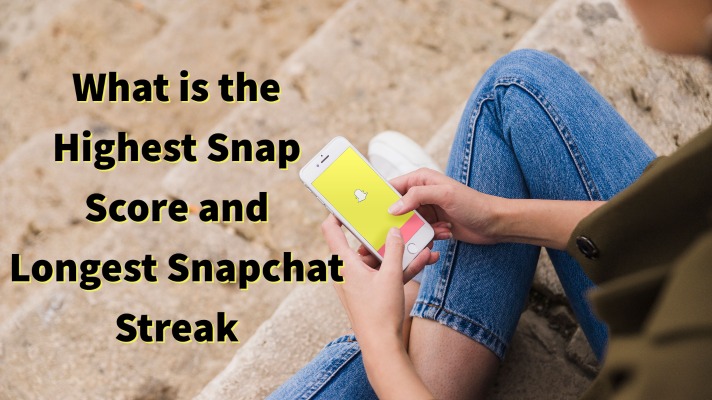 The Snapchat streak feature was debuted on April 6th, 2015, and as of January 2022, the longest Snapchat streak is 2474+, which belongs to Luke and Alex and is still recorded today.

According to s the number of days you’ve been sending snaps, your Snapchat streak score is represented by a number next to the user’s name and an emoji.

It’s easy to see how this seemingly insignificant feature has become competitive.

With so many daily active users and so many snaps sent each day, keeping track of the highest Snapchat streak score becomes a difficult task.

An official scoreboard within the program would easily remedy this, but until then, individuals all over the world keep their track.

What is the highest snap score?

Snapchat is currently used by millions of people every day. There are also a lot of people who have gotten high snap scores.

I’ll list the Snapchat accounts with the best snap scores and the longest Snapchat streaks in this article.

Here’s a breakdown of some of the most impressive snap scores from the second half of 2022:

Since its creation in 2011, Snapchat has been a key participant in the social media world. Since then, the number of active users has steadily increased, reaching a staggering 238 million daily active users in the second half of 2021 alone.

Snapchat has created a completely new way for people to communicate with their friends and acquaintances.

Instead of ordinary text messaging, users frequently get to trade photographs and videos with fun filters, stickers, and emoticons. “Hello!” and “What’s up!” are no longer awkward conversation starters.

Simply press the in-app camera button to capture a picture.

How to Increase Snap Score?

When you send and open image and video snaps, as well as when you publish stories, your Snapchat score rises. I’ve explained how to increase your snap score naturally in this article.

Get Start by Checking your Score

You can tap the score to see a breakdown of how many snaps you’ve sent versus how many you’ve received.

Each Snap you send boosts your snap score by one, so make snapping your friends a regular part of your day.

If you haven’t used Snapchat in a few days, your first Snap after the hiatus will reward you with 6 points.

Snap Multiple Friends at Once

When you send the Snap to a friend, you get the point. You can send snaps to many pals at the same time because sending a snapshot to ten people will get you roughly 10-11 points.

You can choose companions by pressing their names after taking a picture and tapping the white “Send” arrow.

When you hit the “Send” arrow a second time, your Snap will be sent to each of the people you chose.

The more friends you submit photos to, the more frequently you’ll receive photos that you can open.

Every Snap that you open earns you a point. Tap the red (picture) or purple (video) box next to the sender’s name to open a snap.

Send Snap Instead of Direct Messages

Sending and receiving direct messages using Snapchat does not contribute to your Snapchat score.

By tapping a conversation message from a sender and then tapping the round “Catch” button over the console to react with an image, you can earn points by sending visit messages.

Each Snap you include in your tale earns you a point. Tap the “Send” bolt-on a completed snap to add it to your story; then tap the My Story hover in the upper-left corner of the beneficiaries screen.

Many people say that hacking the Snapchat server or through other techniques, they may improve your snap score.

They guarantee that if you give them money, your snap score will skyrocket.

Please stay clear from these folks because they will have your Snapchat account permanently suspended.

It’s not easy to notice that using Snapchat is the greatest strategy to boost your Snapchat score.

All you have to do is tap the Bitmoji icon in the top left corner of your screen to see your Snapchat score. Your profile will appear, with your username and Snapchat score shown.

That’s all there is to it!

If you want to check more details, such as how many snaps you’ve sent and received, tap on your score and you’ll see two separate numbers display.

If you want to know where your friends rank in the Snapchat leaderboard, you can do so just as easily.

Open a chat window and select the top three lines. This will bring up a new window with details on your acquaintance.

Their Snapchat score is one of them.

You, on the other hand, are unable to view the snaps shared and received for your buddies.

How to get your Snapchat Streak Back

Maintaining a Snapchat streak is difficult, especially when it has lasted a long period. It is, however, aggravating when you lose it for no apparent reason.

Relax, take a deep breath, and go to Snapchat Support if you realize your streak number has vanished.

Choose “My Snapstreak Disappeared” from the list of possibilities and fill out the form. They’ll want you to write down your username, email address, phone number, friend’s username, and the last number of streaks you counted.

Snapchat will review your Snapchat streak after you file your complaint and contact you.

As I told above, about longest Snapchat streaks holder are:

Is there a Snapchat streak limit?

If the icon of the person you’re texting has a 100 emoji next to it, it implies the two of you have been streaking for 100 days.

How to get your Snapchat score up?

The app rewards the user with points when they send snaps and when they upload a photo to their account. The app rules make it clear that users do not receive points for communicating. Finally, you will be rewarded with points for successfully opening a snap. User points will not increase as a result of watching the narrative.

What Exactly Is a Snap Score?

This is dependent on what you’re doing. Snapchat points are earned through sending personal messages, opening stories, and submitting a snap to your profile. As previously stated, it is dependent on your activity.

Is there a limit for how long your Snapchat streak could be?

I did some investigation and discovered that there is no limit to how long a user’s snap streak can last. The phenomenon is simple: users can send a snap to anyone on any given day, resulting in longer Snapchat streaks. Because numerous days indicate how long this specific feature of the app has been available, we know the streak maximum is 2,189 days.

The second aspect is that the record will be updated throughout the day. As a result, this app has no limitations. Visit the official app website and navigate to the policy page for additional information. All of the answers to your inquiries can be found here.

When your Snapchat Score isn’t Updating?

When someone uploads a picture or sends an image app, their score immediately rises, however when you look at other people’s profiles, their score remains unchanged. Don’t be concerned. It may take a few hours or even a day, but the good news is that you can see your points right away.

How Does Snapchat’s Score Work?

Many people are confused about what Snapchat’s score is and how it works. You might think of Snapchat’s score as the points you earn for doing various activities on the app, like sending and receiving streaks.

How do you get points on Snapchat?

The number of snaps you’ve sent and received from your buddies determines your Snapchat score. You don’t get a point from stories. Many people believe that stories also teach you something, but this is not the case. It just displays your app activity.

How To Check The Snapchat Score Of Another User?

Select a conversation with the friend whose score you’d want to see. Tap on their profile symbol after starting a chat; a new window will open with their username and snap score next to it.

Snapchat has had more than 238 million daily users for a long time, and a portion of these users dominate in obtaining the highest snap scores. Snap streaks, in addition to the most notable snap scores, are also very popular.